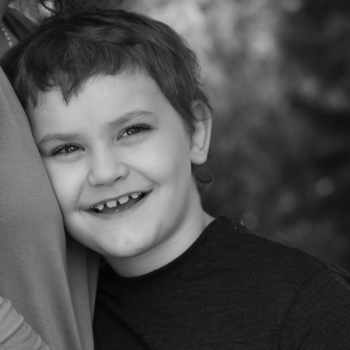 Eight-year-old Jackson lives with his parents and younger brother in the Midwest of the United States. Jackson’s story starts at birth.

His mother Alexis had been diagnosed with autosomal dominant hypocalcemia type 1 (ADH1) at age 16 after years of unexplained seizures and eventual chronic kidney disease, so doctors screened Jackson for the gene mutation that causes the disorder. Initially, the results came back negative, but additional testing revealed that Jackson had inherited the rare condition. Upon hearing the news, Alexis felt like she “broke,” and worried that her son would experience the same feelings of alienation, arduous medical regimens and frequent hospital stays that she did as a child. Fortunately, due to advancements in knowledge and medicine, Jackson’s experience with this condition has been less difficult than his mother’s.

Yet he still faces significant challenges most children do not face. While Jackson likes to run, play outside and keep up with his friends and younger brother, he fatigues quickly and experiences pain in his stomach and arms, even when he’s just watching his favorite shows. However, Jackson is resolved to keep going and play like any other child: “I just lose energy very, very fast…I feel like I’m just gonna fall right over…sometimes [my] arms feel like they’re going to fall off.”

While Jackson has not experienced the same grand mal episodes his mother endured, he has suffered from seizures caused by low calcium levels. Alexis recalled one event that occurred shortly after Jackson’s younger brother was born.

“That was the scariest time because…[Jackson] was in bed with me. And all of a sudden, it sounded like he was choking. I look over, and he was seizing. He stopped breathing three times. Mind you, I have a one month old next to me. So I had to move him and get Jackson situated. It was beyond scary. When I ran outside, the cold air finally woke him up. He woke up in an [ambulance].”

Jackson doesn’t like having to take medicine every day and recognizes it’s difficult for other children his age to understand his condition. “He does have his moments where some days he says, ‘I wish I didn’t have to do this,’” Alexis explained. “He doesn’t fully understand the health issues from that aspect of it, as well.”

Alexis guides her son through his experience with ADH1 with compassion, empathy and faith in their combined strength to keep pushing forward. When asked if there was something Jackson wanted to tell people about his condition, he asked, “Why don’t we have a cure yet?”

“It kind of breaks my heart, hearing him say he wishes there was a cure,” Alexis replied. To Jackson, she responded, “Even if there’s no cure, you can still go and you can still live your life, because I learned at a very young age that there isn’t a cure for this.”

Alexis emphasized for other parents of children with ADH1 that they should not lose hope. “There [are] ways to help and ways to keep on going.”